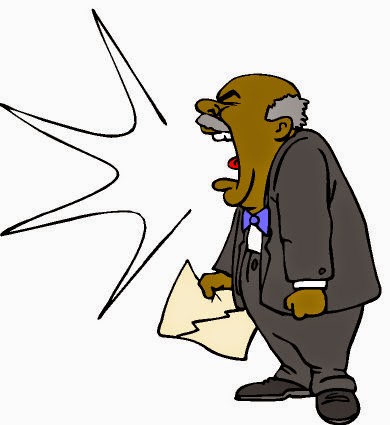 Think long and hard before you criticize, condemn or complain about anyone to themselves or to other people. Will any benefit come to you or them from your criticism?

When were you last criticized? Was it by your spouse or partner over a trivial household matter? Was it by your boss over your work not being on time? Was it by your mother or father over the way you do something that never comes up to their standard? Did you like it? I suspect not. I don’t like being criticized. I don’t like to be criticized by my spouse for comments I passed before we married. I didn’t like it when a very critical former boss criticized my work. I didn’t like it when my mother said I was odd and getting odder. No one likes to be criticized. So why do we criticize, condemn and complain about other people? They don’t like it either.
One criticism my spouse makes of me from before we were married is that I complained about her spending and timekeeping. My criticisms must have cut deep, because I still hear complaints about my complaints 15 years later. Everyone knows their own faults. They don’t want to be reminded of them. So why do so many of us criticize others for their failings, major or minor?
Chances are slim that someone will actually change their opinion or behavior as a result of something you say. So what is the point of saying it? What are you going to gain by doing so? Maybe you think you will get peace of mind by letting them know your opinion. You are not going to take it. But ask yourself whether this small amount of personal satisfaction is worth the extra animosity it may create in the mind of the other person.
We are human, and most of us react to things we don’t like. We are programmed by evolution to react to attacks on us with a fight or flight response. This is appropriate for dealing with an attack by a saber-toothed tiger. It is usually an overreaction to the minor incidents that irk us nowadays. We need to realize that the other party is likely to react to our overreaction with a similar overreaction.
The trick is to find a way of containing your anger without letting the other person know. A good method is to write an email to the person who annoyed you. Omit their email address. After you have written all that you are going to write, save a draft. Reread it 24 hours later and decide if you need to edit it before sending, or to send it at all. Chances are you will not feel quite so strongly as when you wrote it. Omitting the address is a good way to make sure you don’t accidentally send it.
Dale Carnegie gives a good example of someone who learned to modify his condemnations of others. Young Abraham Lincoln would often write letters critical of others. He ended up being challenged to a duel by someone he had criticized in an anonymous letter to a newspaper. The duel with broadswords on a sandbank of the Mississippi was stopped by the seconds before any harm was done. The incident had such an effect on Lincoln that he modified his behavior and afterwards seldom criticized others. During the course of the American Civil War he had plenty to be concerned about when his generals were not doing as well as he would like. He wrote a letter to General Meade criticizing him for not attacking Lee’s forces before they retreated across the Potomac. Lee’s defeated army had been temporarily slowed by floodwaters of the Potomac after the Battle of Gettysburg, and Lincoln thought Meade missed a great opportunity to end the war 3 years early. But the letter was found in his papers. He never sent it.
Think long and hard before you criticize, condemn or complain about others to themselves or to third parties. Think about complaints you may make about the government or businesses. Is your complaint justified? Will any benefit come from your criticism? In some cases there is good reason, but even in those cases be careful about the language you use.

This is an extract from ‘Improve your life’ by George Nicholas. It is based on ideas of Dale Carnegie from ‘How to win friends and influence people’.
Posted by Unknown at 22:39